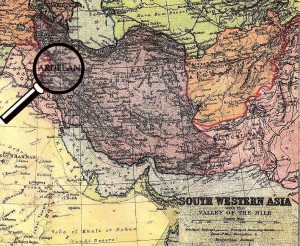 Ardalan: was the ancient name of Iran’s Kurdistan. It is also the name of the largest Kurd tribe, which is one of the oldest families in Iran. At first they were residing in their native land (Kurdistan). Then some of them immigrated into other cities of Iran, Europe, America, and other countries. In spite of these separations, they have still kept their family ties through family gatherings called “Ardalan Family Center” whenever possible.

According to historians, their ancestors have either originated back from the Sassanian Kings (Ardeshir Babakan, or Babak Sassani), or the famous Kurd’s poet and historian (Hajjar).
In Hajjar’s translation of Sharafnameh has traced the closest ancestor to Baba Ardalan, Ghobad Ebne Firooz Sassani, as one of the descendants of Ghobad Sassani, who was the famous King of Sassanian in 487 AD. Baba Ardalan Ghobad Ebne Firooz Sasani established Ardalan’s dynasty about 1219 AD in Kurdistan. However, this dynasty that was ruled by their descendants surrendered its power in 1867 AD, but it did not take long that several members of this family came to power again, which The last one was Abas Khan Ardalan(Sardar Rashid).
Ardalan rulers are known by developing their region from every point of view. There are many traceable feats, which have been referenced in historical books: The City of Sanandaj. Dar Al Ehsan mosque (an archeological glory furnished with the finest antique Persian carpets), and Khosro Abad Palace are a few of their historical sites that are shown in this website.
In order to avoid having identical first and last names some of this family’s members have chosen their father’s titles as their middle names, as a prefix for their last name, and some have adopted their father’s titles as their last name. Nevertheless, they are all members of this family.
The family tree that is shown in this website includes all of the Ardalan families and is the result of my 10 years of hard work. It not only is an interesting painting of an old tree, but it also illustrates 30 generations with 10,000 names of Ardalan’s genealogies from the beginning (487 AD) up to 1997 AD.
My purpose of depicting our family history in this form was to create a visual snapshot of our family history for every household of this great family. It is my hope and desire that this will raise the awareness of newer generations in their historical background.
Y. R. ARDALAN